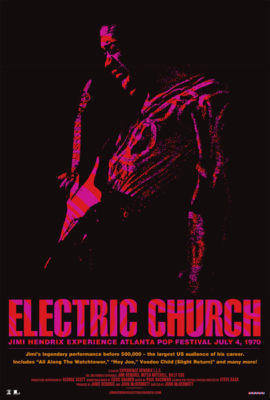 The film opens at the Cinerama Dome/ArcLight Hollywood theater on January 31st with a special Q&A with director John McDermott, legendary record producer and engineer Eddie Kramer (best known for not only collaborating with Hendrix but also with The Beatles, David Bowie, Eric Clapton,  The Rolling Stones and others and Jimi’s sister and Experience Hendrix C.E.O. Janie Hendrix. Original Atlanta Pop producer/director Steve Rash will also be part of the pane that will be moderated by 89.3-KPCC’s John Rabe. The much-lauded documentary, which originally aired on Showtime, tells the story of the Jimi Hendrix Experience’s involvement as the headliner of the Second Atlanta International Pop Festival, then hailed as the ‘Southern Woodstock.’

Richard Abramowitz, CEO of Abrmorama stated, “We’re honored to add another Jimi Hendrix movie to the exalted list of music films we’ve released. Jimi certainly belongs in the pantheon with The Beatles, Bob Dylan, Neil Young, Pearl Jam, Tony Bennett and the many others we’ve been privileged to handle around the world.”

Janie Hendrix commented on the Electric Church partnership with Abramorama, “It’s thrilling on so many levels. Seeing Jimi re-introduced around the world through this platform is something of a rebirth.” She added, “The moments captured in the film are timeless. Jimi’s music and his showmanship are born again for new generations in his Electric Church.  It’s very exciting.”

Howard University Physicians to Men: ‘Take control of your health’

Scala Inc. to Present 77 WABC’s “The John Batchelor Show” Airing Live This Week From Central Asia at Tashkent, the Capital of the Uzbekistan...

iHeartMedia Shares Highlights From “Commencement: Speeches For The Class Of 2020” Podcast And...

Trump warns anarchists and looters as he heads to Mount Rushmore

iHeartMedia Shares Highlights From “Commencement: Speeches For The Class Of 2020”...