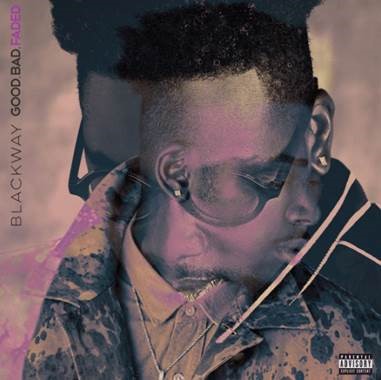 Get it HERE.Born in Brooklyn and raised between Ghana and New York City, the rapper and singer brings the kind of heat that can translate to every corner of the globe on these six tracks. The first single “Andaz” serves up an intoxicating and infectious refrain strained through his woozy croon. Meanwhile, he turns up on “Cake” [feat.Bandhunta Izzy], which thrives on a high energy groove and club-ready bounce. All in all, Good.Bad.Faded.showcases the scope of Blackway’s scorching singular sound. Check out the full tracklisting below.

At the close of 2017, he landed a high-profile contract with Republic Records and unlashed a fan favorite in the form of “That Fast” [feat. Gucci Mane & DJ Battle]. It is quickly approaching 1 million streams on Spotify.

Giving hip-hop a new dialect, Blackway dropped his first mixtape Broken Language in 2011. After a stint back in Ghana, he further honed a signature style on 2014’s Radiant Child powered by the single “Lost My Mind.”Between making his SXSW debut in 2017, he served up New Yhana and turned up on collaborations with the likes of New York legend Uncle Murda. Acclaimed by The Fader and more, 2017 saw him ink a major label deal with Republic Records.

Smerconish: The toughest test is yet to come