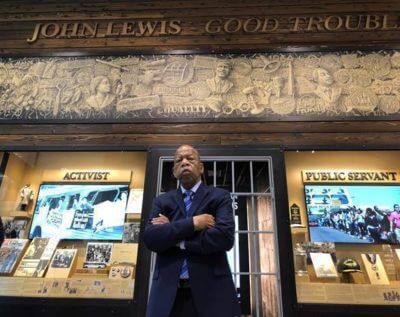 Following the successes of RBG, THREE IDENTICAL STRANGERS, and APOLLO 11, CNN Films announced today that it has partnered with Trilogy Films and Color Farm Media to develop a documentary feature about John Robert Lewis.  Directed by Dawn Porter (Gideon’s Army), the film will explore the extraordinary life of the civil rights icon and Georgia Congressman.   CNN Films will retain North American broadcast rights for the film.  Other U.S. rights for the film, including theatrical distribution, remain available.   AGC Studios is co-financing and controls international rights that will be sold via its worldwide sales subsidiary, AGC International.

The untitled film is being produced by Porter and Laura Michalchyshyn for Trilogy Films, withErika Alexander and Ben Arnon of Color Farm Media.  The executive producers are AmyEntelis and Courtney Sexton for CNN Films; and Stuart Ford and Rachel Traub for AGC Studios.

Porter started her year of principal photography with the Congressman in September 2018, as he began an exhaustive campaign schedule for himself and others in advance of the 2018 U.S. midterm elections and continued through the first year of the 116th Congress.  Her cameras followed a modern political thriller that unfolded as the nation lurched towards a record-setting government shutdown, and will continue to follow the Congressman through 2019.  Ultimately, using interviews and archival footage, the film will illustrate how Lewis’ 60+ years of legendary social activism and legislative action on civil rights, voting rights, gun control, healthcare reform, and immigration, has prepared him for today.

Porter’s present-day interviews with Lewis, now 79 years old, will explore his childhood experiences, his inspiring family, and his fateful meeting with Dr. Martin Luther King, Jr., in 1957.  Lewis, whom King nicknamed ‘the Boy from Troy,’ in recognition of Lewis’ preternatural oratory and commitment to social justice, would go on to become one of King’s most trusted contemporaries, and, as the then-chair of the Student Nonviolent Coordinating Committee, Lewis was the youngest speaker at the 1963 March on Washington for Jobs and Freedom.

“John Lewis is a national treasure whose leadership paved the way for a generation.  In much the same way as his life and work has been shaped by great civil rights leaders, Congressman Lewis continues to serve the country, introducing legislation to protect our most fundamental rights.  There has never been a more urgent need for the type of moral and compassionate leadership that he embodies.  I am so honored to be directing this documentary for CNN Films, in partnership with AGC Studios, and am excited to show the world how John Lewis continues to make what he calls ‘Good Trouble,’” said Dawn Porter, founder of Trilogy Films and director of the feature.

In addition to her interviews with Lewis and his family, Porter’s primarily cinéma verité film will also include interviews with political leaders, Congressional colleagues, and other people who figure prominently in his life.  Lewis’ speeches and achievements will be highlighted through rare and recently-discovered writings, insights from Lewis and people in his intimate circle, as well as visual and audio archival material that illuminate his continued influence on American culture and Congress.

“CNN Films is honored to be a part of telling Rep. John Lewis’ historic life through Dawn’s film,” said Amy Entelis, executive vice president for talent and content development for CNN Worldwide, and Courtney Sexton, vice president for CNN Films, both executive producers for the film. “We hope generations to come will learn from Mr. Lewis’ remarkable American story.”

The film about John Lewis marks the third collaboration between CNN Worldwide and producerLaura Michalchyshyn.  Their previous collaborations include the CNN Original SeriesChicagoland (2014), and Death Row Stories, now approaching its fourth season as an HLN Originals Series.