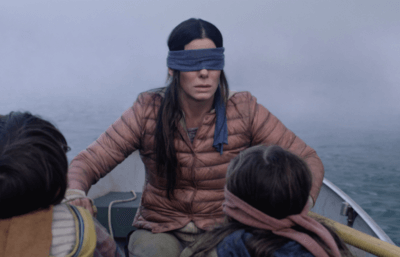 The characters in Netflix’s record-setting movie Bird Box may have had to shield their eyes to avoid certain demise, but the stats around just how many people saw the movie need to be seen to be believed.

New data from the most recent release of  The 2019 Infinite Dial Study by Edison Research and Triton Digital® shows that 32% of the U.S. online population age 12+, or more than 84 million people, have seen the Netflix film Bird Box starring Sandra Bullock, as of January 2019. The movie is still available for viewing, so that number will continue to grow.

Of the respondents who said they subscribe to Netflix, 51%  said they saw Bird Box.

The 2019 Infinite Dial is the latest report in a series dating back to 1998 that covers consumer usage of media and technology, has tracked many new mediums as they develop. The Infinite Dial currently provides the latest research in U.S. digital audio, mobile, smart speakers, podcast consumption, and social media.

“It is impossible not to be interested in the reach of a streamed movie with no theatrical release that generated tremendous media coverage, memes, and online interactions. Bird Boxproves that original, streamed, content can reach massive numbers of Americans,” said Edison President Larry Rosin.

Quantifying just how many people saw Bird Box has been a topic of much speculation since the film premiered in December, 2018. Previous estimates for viewership of Bird Boxrange from 45 million worldwide accounts over the 2018 holidays, according to Netflix, to 28 million U.S. viewers in the first seven days alone, according to Nielsen.

How the study was conducted:
A total of 4,126 persons age 12 and older participated in an online survey between January 15 and February 4, 2109, to explore Americans’ use of digital platforms and new media. The survey was offered in both Spanish and English. Data was weighted to national 12+ U.S. online population estimates.

Edison Research has no business relationship with Netflix.

Westwood One Brings Back Theresa Gage as VP, Sponsorship Sales and Marketing

Usher to Host and Perform During the 2020 “iHeartRadio Music Awards,” Airing Live from the Shrine Auditorium in Los Angeles, Sunday, March 29, on FOX

Undeniable Top 10 Most Underrated Movies of All Time

Hollywood history is riddled with instances of top-notch films that, for whatever reason, didn't receive their full due.