New data sheds light on the impact of GoT on HBO's popularity | Rhythmic.fm Skip to content

As the final season of Game of Thrones ramps up, the data team at YouGov decided to look into the impact that HBO has carried among the public discourse. The results show HBO undergoing a significant increase in both WoM and Buzz among US consumers aged 18-34 while the rest of the media sector remains relatively stable.

Furthermore, the increase in both of these variables directly coincide with Game of Thrones’ arrival and marketing initiatives.  Finally, the data shows that over a quarter of all US consumers ages 18-34 say they discussed HBO in the past two weeks. 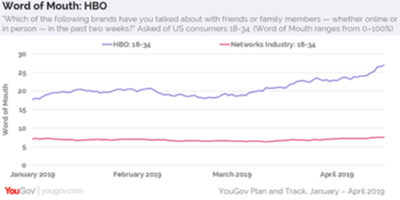 Undeniable Top 10 Most Underrated Movies of All Time

Hollywood history is riddled with instances of top-notch films that, for whatever reason, didn't receive their full due.