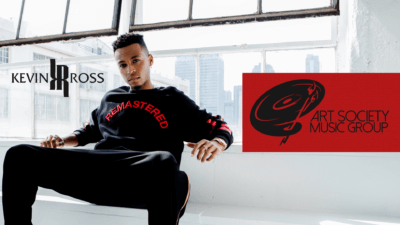 R&B singer Kevin Ross burst onto the music scene in 2014 with a national holiday campaign with Glade that brought joy to American households across the country.

Signed to Motown Records, he was named AOL’s breakout artist of 2014 and he released his debut album, The Awakening, three years later. After years of chart-topping success with Motown Records (being the first artist in seven years to have their first single shoot straight to #1 on Billboard), Ross has officially  announced that he and the label have parted ways. “Ownership means a lot more to me at this stage in my life.” he shares. “I’m grateful for the experience but it was time to move on.”

During his brief hiatus from music, Ross solidified his independence with the creation of his music label, Art Society Music Group (ASMG). The label will be the home for Ross’ new album, Audacity, that is slated to be released in March of this year. “Creating Audacity has been an exciting process for me. I really followed my instincts and let the music guide me the whole way.” Ross says. “This album has a lot more grit to it. It introduces new sides of me while still reinforcing the essence of my art.”

Westwood One News Presents The Lunar Conquest, a Retrospective Saluting the 50th Anniversary of Apollo 11

Scala Inc. to Present 77 WABC’s “The John Batchelor Show” Airing Live This Week From Central Asia at Tashkent, the Capital of the Uzbekistan...

If The Shoebooty Fits… Wear It!

Will Cam Newton’s personality fit with Bill Belichick’s? | Get Up

Bash presses GOP Senator: You criticized Obama in 2014 for this

Fareed: Coronavirus won’t be a death knell for big cities. Here’s why

Mark Morgan weighs in on Portland’s 38th day of protests

Media company doubles down on pro-police flag after receiving threats