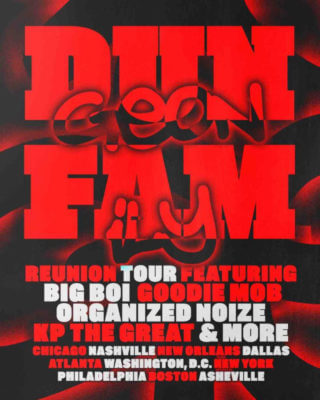 On Sunday, Big Boi joined Maroon 5 and Travis Scott for a seismic Super Bowl performance, blurring the lines between genres and styles and delivering a blockbuster moment for the culture.

During the performance, Big debuted the exclusive Atlien jackets available at OUTKAST.com now.

On the heels of the release of his new tracks “Doin’ It” [feat. Sleepy Brown] and “Return of the Dope Boi”[feat. Killer Mike & Backbone] Big Boi unveils the music video for “Doin’ It [feat. Sleepy Brown].” The video magnifies the artist’s world in vivid widescreen complete with old school Cadillacs, fur coats, owls, and other surprises. Click HERE to view!

Both tracks are available HERE via HITCO.

Additionally, he will embark on the Dungeon Family Tour 2019 with a bill stacked with Atlanta luminaries and members of the Dungeon Family, including Goodie Mob, Sleepy Brown, Organized Noize, and KP The Great. Tickets go on-sale February 8th. It kicks off on Saturday April 14 in Chicago, IL at House of Blues, rolls through major markets on the East Coast and in the South, and concludes Friday April 27 at Salvage Station in Asheville, NC. Check out the full confirmed itinerary below & get more information here: http://dudgeonfailytour.com

This is just the beginning for a massive 2019 for the GRAMMY®Award-winning diamond selling artist, rapper, songwriter, record producer, actor, and philanthropist. Big Boi takes hip-hop to another dimension once again.

Super Bowl Commercials: Will Chance The Rapper Have The Best One?

Trump warns anarchists and looters as he heads to Mount Rushmore

See how Canada crushed the curve while the US struggles